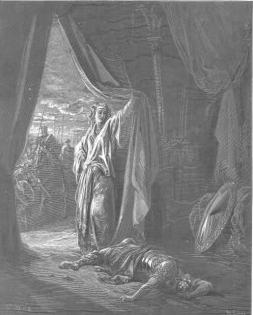 Judges 4:1-9 & 17 1And the children of Israel again did evil in the sight of the LORD, when Ehud was dead. 2And the LORD sold them into the hand of Jabin king of Canaan, that reigned in Hazor; the captain of whose host was Sisera, which dwelt in Harosheth of the Gentiles. 3And the children of Israel cried unto the LORD: for he had nine hundred chariots of iron; and twenty years he mightily oppressed the children of Israel. 4And Deborah, a prophetess, the wife of Lapidoth, she judged Israel at that time.5And she dwelt under the palm tree of Deborah between Ramah and Bethel in mount Ephraim: and the children of Israel came up to her for judgment.
6And she sent and called Barak the son of Abinoam out of Kedeshnaphtali, and said unto him, Hath not the LORD God of Israel commanded, saying, Go and draw toward mount Tabor, and take with thee ten thousand men of the children of Naphtali and of the children of Zebulun? 7And I will draw unto thee to the river Kishon Sisera, the captain of Jabin's army, with his chariots and his multitude; and I will deliver him into thine hand.
8And Barak said unto her, If thou wilt go with me, then I will go: but if thou wilt not go with me, then I will not go. 9And she said, I will surely go with thee: notwithstanding the journey that thou takest shall not be for thine honour; for the LORD shall sell Sisera into the hand of a woman. And Deborah arose, and went with Barak to Kedesh.
17Howbeit Sisera fled away on his feet to the tent of Jael the wife of Heber the Kenite: for there was peace between Jabin the king of Hazor and the house of Heber the Kenite.”